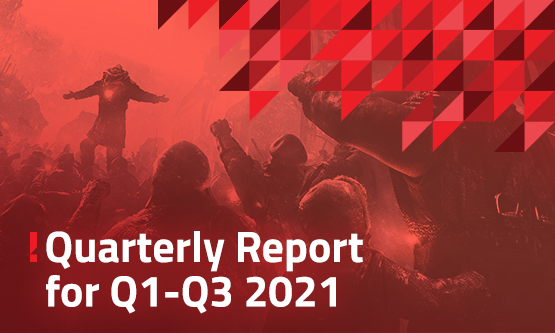 “Our performance in the first nine months of the year, which proved much better than we assumed  in the budget both in terms of revenue and profits, clearly shows that the consistently implemented strategy for the Company’s growth is bringing tangible financial results,” said Przemysław Marszał, President of the 11 bit studios Management Board. He also pointed out that the profit was reduced by non-cash provisions recognised in connection with the Company’s 2021–2025 Incentive Scheme. In the reporting period, they reached nearly PLN 2.92 million.

According to Mr Marszał, the robust financial figures that the Company reported for the first nine months of 2021 despite no new game releases are due to effective monetisation of the entire portfolio, including the proprietary titles and those marketed by the 11 bit publishing division. “The revenue from Moonlighter, Children of Morta and other third-party productions accounted for some 25% of the Company’s total revenue in the period”, he said. He believes that a title deserving special mention is Frostpunk, both the base version of the game and paid DLCs available as part of the Season Pass. “By the end of September 2021, almost one in four Frostpunk owners decided to purchase a DLC, which is a rate far in excess of the market averages,” he stressed. Another testament to the strength of the Frostpunk brand is the great interest of gamers in the new addition to this title’s universe, i.e. Frostpunk 2. Its trailer, which premiered on August 12th this year, already has well over five million views on Youtube and other platforms, and the number of players who have put Frostpunk 2 on their wishlist on Steam far exceeds the wishlist for Frostpunk immediately before the game’s market release in April 2018. Frostpunk 2 is currently the 14th most anticipated game (based on interest measured by numbers on wishlists) on Steam.

In the following periods, 11 bit studios S.A. wants to focus on three proprietary games, i.e. Frostpunk 2, Dolly and Project 8. “Their aggregate production budget is some PLN 110 million,” Mr Marszał reminds. Another PLN 30 million is going to be spent on three games of the 11 bit publishing division: Vitriol, Botin and Ava. “We have also earmarked a further PLN 50 million for new titles in our publishing portfolio. We intend to spend these funds by the end of 2023,” says Mr Marszał. He declares that efforts to acquire new titles for the publishing portfolio have recently picked up pace and are bringing results, on which the Company will report soon.

The recruitment of new employees for the internal development teams as well as other organisational units has also accelerated in the last months. “At the end of December, our headcount should reach 200, in line with the plan for this year. In this way we will be prepared to efficiently run a far greater number of business projects at the same time,” Mr Marszał comments. From what he says their time horizon extends well beyond the next few quarters. An example of such projects is the intense work on creating a corporate group. “We hope that we will be able to unveil more details in the near future, and that the results of our initiatives and further announcements will be well received by the Shareholders and Investors,” he sums up.

The company he manages can afford to finance its planned investments with internally generated funds: in the period from January to September of this year alone 11 bit studios S.A. reported an operating cash flow of more than PLN 33 million, and its financial assets at the end of September 2021 (cash and cash equivalents, financial instruments and trade and tax receivables) were already valued at PLN 121.5 million. The Company’s total liabilities as at the end of September stood at PLN 19.2 million, down 11.3% on the amount reported at the beginning of the year.