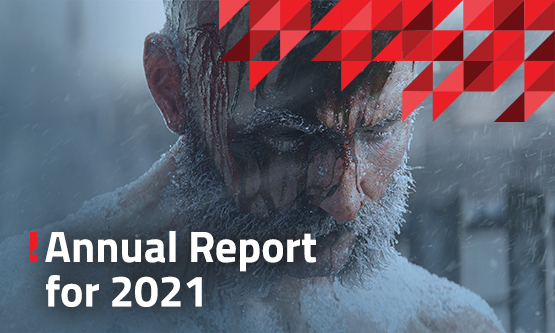 The Company’s strong fundamentals bode well for the future

11 bit studios S.A. has announced its financial results for 2021, with over PLN 70.1 million in revenue, PLN 28.57 million in net profit and more than PLN 107.4 million in cash and cash equivalents.

Solid profits earned in 2021 and cash resources growing year by year despite impressive investments in new games prove that the Company has successfully switched to remote and hybrid work models, which it was forced to apply due to the ongoing COVID-19 pandemic. “Our company went through that period of organisational and operational challenges without any major problems,” assures Przemysław Marszał, CEO of 11 bit studios S.A.

The Company under his management reported revenue of PLN 70.12 million in 2021. EBITDA reached PLN 38.95 million. Operating profit was PLN 30.03 million and net profit came in at PLN 28.57 million. “The reported figures, while slightly lower than in 2020, are much better than we planned in our budget,” said 11 bit studios S.A.’s representative. He points out that, as in previous periods, earnings were brought down by a non-cash charge for the costs of the 2021–2025 Incentive Scheme, amounting to nearly PLN 3.35 million on a cumulative basis. The Company entered 2022 with financial assets (cash and secure financial instruments) of PLN 107.41 million, 11.73% higher than the year before, a record result in the Company’s history. With trade receivables added, this amount grows to PLN 123.90 million. At the same time, as at the end of December the Company had liabilities of only 22.15 million.

Przemysław Marszał believes that the cash reserves and continuing satisfactory sales of Frostpunk and other titles from the company’s proprietary and publishing portfolios make the Management Board of 11 Bit Studios S.A. confident about the Company’s future prospects. “However, we are carefully watching the geopolitical changes taking place in the world, including across our eastern border, and seeking to address them in our business on an ongoing basis. This also applies to adverse macroeconomic developments such as the global economic slowdown or rising inflation, which in the long term will translate into falling consumption, and even now are directly affecting the Company by driving up operating costs,” says the CEO.

He declares that despite the headwinds, 11 bit studios S.A. does not intend to change its plans for the coming quarters, which are well-defined and go beyond the new game launches the Company is currently preparing for. “In August 2021, we showed the first promotional material for Frostpunk 2, one of the three in-house developed games, apart from Dolly and Project 8, we are working on. The fans’ response to the announcement of the release of the title that is not just a simple continuation of the first game in the series, measured by its high position on the Steam wishlist, exceeded our expectations,” Mr Marszał points out. “We hope to see an equally enthusiastic response when we unveil more details of our next two productions, including one from our publishing portfolio, which we plan to do by the end of this half year,” he adds. He also makes it clear that these will not be the only interesting news the Company is preparing for the coming months. “The second half of this year is going to be equally eventful, as we intend to share more information on Frostpunk 2 and other productions then,” he concludes.

Mr Marszał says that the Company’s long-term plans go far beyond release of the games that were announced some time ago and whose production is in full swing. “An example of activities of strategic importance to 11 bit studios S.A.’s growth is the recent acquisition of 40 percent of shares in Fool’s Theory, whose team is working on Vitriol, a game being developed as part of our publishing business. We are convinced that combining the capabilities of the two teams will bring significant synergies and will result in new interesting titles, expected by fans around the world,” says Mr Marszał. He believes that the investment in Fool’s Theory is the first, and thus very important phase on the way to creating cross-equity links with other entities in the computer games industry, which 11 bit studios S.A. is considering. “And it is by no means the only direction we are thinking of when planning expansion in the long term,” he adds.

Mr Marszał assures that the Company is preparing very carefully for the scaling up of its operations. “We are expanding our organisational structure to better meet the challenges we are facing. We are continuing recruitment of new employees for the internal development teams as well as other organisational units,” he explains. 11 bit studios S.A. already employs over 200 people. “This year, another 50-60 team members are expected to be added to our payroll list. We want the Company to be prepared to simultaneously run a greater number of projects in the near future.” he concludes.