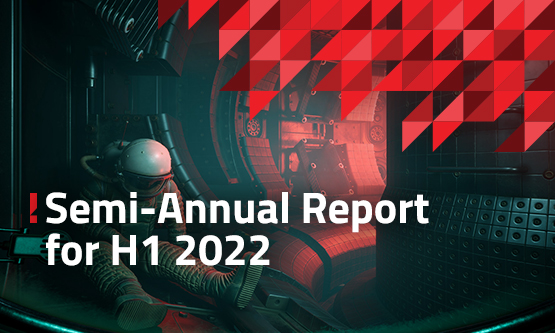 With excellent monetisation of the entire product portfolio, including the games from the publishing portfolio, the Company’s results for the first half of 2022 improved year on year.

Nearly PLN 45.8 million in sales revenue, PLN 16.49 million in EBITDA, PLN 13.42 million in operating profit, PLN 15.08 million in net profit and PLN 109.5 million in financial assets (cash and cash equivalents and secure financial instruments) – these are the results of 11 bit studios S.A. for the first six months of 2022. “Despite the unfavourable macroeconomic environment, the results generated by our Company are better than a year earlier and, at the same time, clearly better than we assumed internally in the budget for the period,” comments Przemysław Marszał, CEO of 11 bit studios S.A.

At the same time, he admits that the first half of this year was a period of major organisational challenges for the Company he heads, related, for example, to the return of employees to the office after the COVID-19 pandemic or the war across the eastern border. “Starting from April, our entire team has been working in a hybrid model. We, as well as the employees, are satisfied with the results of working under this model,” the CEO said. He recalls that the Company made a PLN 3.66 million donation to the Ukrainian Red Cross and the funds for this purpose came from the sale of the game This War of Mine.

Przemysław Marszał declares that despite some turbulence, work on all proprietary and third party (publishing portfolio) games is moving forward at a satisfactory pace. “Frostpunk 2, The Alters and Project 8 as well as our publishing portfolio projects are going through the subsequent production phases. We are intensifying work on further marketing materials and trailers for yet-to-be-announced titles,” he says. In his opinion, the impressive momentum of building the wishlist for Frostpunk 2 or the very good reception of the first trailer for The Alters, released in August 2022, confirm that fans are eagerly awaiting more titles from the 11 bit studios S.A. portfolio. “We believe that also Project 8, the production of which has recently successfully achieved another milestone, will be very well received by players when announced,” Mr Marszał sums up.

11 bit studios S.A. is already preparing operationally for the upcoming game launches. “We are expanding, in addition to the production teams, the marketing, business development and publishing divisions. Our goal to employ about 250 staff by the end of this year is absolutely achievable,” says Mr Marszał. He points out that in view of the growing number of duties and responsibilities the Company’s Management Board was expanded on August 11th 2022 to include Paweł Feldman and Marek Ziemak, top class professionals who have worked for 11 bit studios for years and are among those who played an important part in its success as heads of the business development and publishing divisions, respectively.

In the first half of the year, 11 bit studios S.A. actively participated in consolidation processes in the gaming industry. “As planned, we made two equity investments. 11 bit studios became a shareholder in Fool’s Theory, the producer of Vitriol, one of the games from our publishing portfolio. We also decided to acquire shares in NewConnect-listed Starward Industries, which is the producer of The Invincible, a game based on Stanisław Lem’s popular book of the same name. This is another item in our publishing portfolio,” said Mr Marszał, also noting that, as announced by the producer, the release of The Invincible is planned for next year.

The Company representative declares that the publishing division is working intensively to further expand its portfolio with new projects, on a scale which may markedly exceed the scale of the projects it has published to date. Encouraged by the promising results of its operational partnerships with Fool’s Theory and Starward Industries, 11 bit studios has entered into talks concerning other equity investments. “We believe that in future periods we will be able to announce our achievements in both of these fields,” Przemysław Marszał concluded.