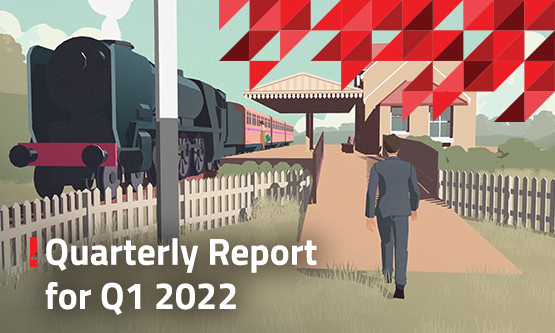 11 bit studios S.A. made a good start to 2022. As in previous periods, the solid figures for the first quarter of 2022, better than assumed in the budget, were due to excellent monetisation of the Company’s entire portfolio of proprietary games. “Worthy of a particular mention are strong sales of This War of Mine in late February and early March when, in response to Russia’s invasion of Ukraine, we decided to donate all revenue from sales of this game during that period to the Ukrainian Red Cross. Our initiative was very well received by the gaming community and the media, not only the gaming industry ones, all over the world,” said Przemysław Marszał, President of the Management Board of 11 bit studios S.A. Mr Marszał notes that the net profit figure would have been higher but for the non-cash provision of PLN 0.83m recognised in connection with the 2021−2025 Incentive Scheme and the donation referred to above, of PLN 3.68m.

Games from the publishing portfolio, led by Moonlighter and Children of Morta, had a positive impact on revenue earned by the Company in the first quarter of 2022 as well. Sales of the latter were markedly supported by the addition of an online co-op mode, which took place on February 14th 2022. Revenue from sale of third-party games in the three months ended March 31st 2022 accounted for 23% of the Company’s total revenue.

The Company’s financial condition measured by the size of cash resources improved for yet another successive quarter despite growing expenditure on new games, pay rise pressures, and higher costs of day-to-day operations, which was clearly attributable to rising inflation. As at March 31st 2022, the total value of 11 bit studios S.A.’s financial assets (cash in bank accounts and secure financial instruments) exceeded PLN 107.8 million and was higher than at the end of 2021.

Mr Marszał stresses that the Company consistently delivers on its plans. “On the last day of February we announced the acquisition of a 40% stake in Fool’s Theory, the producer of Vitriol, one of the games from our publishing portfolio. In April, we announced the execution of an agreement for the release of South of the Circle, a game produced by UK studio State of Play. We strongly believe that we will soon be able to publish more information on similar projects,” concluded Przemysław Marszał.